A scale with an added passing tone or moving certain intervals up and down a half step within a scale to create a hybrid scale. 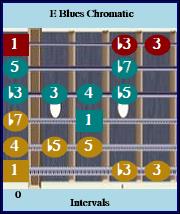 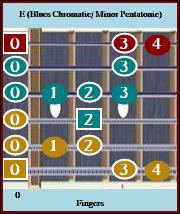 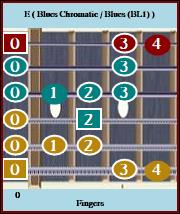 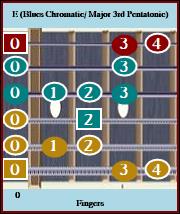 The next Hybrid Blues Scale is the Blues Chromatic Scale that is created by adding two notes Minor Pentatonic Scale. It not only has the diminished 5th added but also the Major 3rd which is not always a passing tone. The unnatural thing about this scale it has four chromatic half steps in a row. A lot of country style guitar players use this scale and they apply a lot of unique chromatic lick variation to these half step notes in their solos.

The next hybrid blues scale is created by moving instead of adding notes by moving the Minor 3rd of the Minor Pentatonic scale up half step to the Major 3rd Interval. This gives a little bit of a Middle Eastern or Gothic sound. The scale relationship of this scales relates to the Mixolydian Mode the fifth degree of the Major Scale and the Phrygian Major Mode fifth degree of the Harmonic Minor Scale. This scale is used in solos by some Rock and Metal Guitar Players Kirk Hammett, George Lynch and Neal Schon, .

The last hybrid blues scale shown is also another scale from moving a note . This scale is is called the Major 6 Pentatonic Scale created by moving the Minor 7th of the Minor Pentatonic Scale down a half step to the Major 6th. The scale relationship of this scale relates to the Dorian Mode the second Degree of the Major Scale. This scale is used by some jazz and jazz fusion guitar players by artists like Allen Holdsworth, Robin Ford and Frank Gambale.

All the diagrams below can easily be explored in much greater depth within the Guitar Analyzer Software.