In music scale theory numbers are used for intervals as an easier way to measure the distance of steps between notes in a music scale or chord. If we count higher than 7 we go into the next octave and 1 starts over again as the 1 in the square of this chromatic scale on the guitar scale fret board (Ex.1). This applies to music scale theory and playing scales on guitar. In chord theory harmony we use interval numbers higher than (7) called compound intervals this will be explained later in future lesson.

The Guitar Analyzer Diagrams below display visually how to understand intervals. Showing dynamically how the scale formula bordered notes overlay the  measuring distance between the notes. This creates an easy way visualize guitar scale shapes to aid guitar players who play by ear. 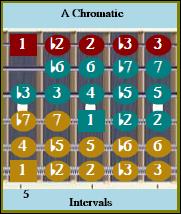 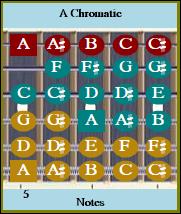 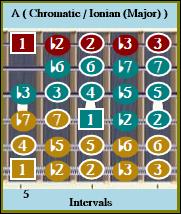 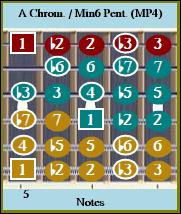