First lets get to know the four fingers of the left hand (opposite if your a left hand player) palm up left to right (1st – Index Finger, 2nd – Middle Finger, 3rd – Ring Finger, 4th – Pinky). The pinky-4 of the four fingers is the weakest finger of the hand and it seems to always want to mimic every movement of the (ring – 3 finger), caused by a shared ligament. Because of this it’s kind of natural to have a resistance to not use the pinky. In the schools of thought in guitar teaching mostly in the styles of Classical and Jazz. There are hard set Correct Guitar Fret Finger Placement Rule that the fingers must set (90 degree vertical) to the frets and the pinky must be used and developed. This is known as the Finger Per Fret Rule and it has a sound mechanical logic when you analyze wasted motion to the leased amount of movement.

This works great and it is something to strive for but not all hands are the same, especially if you have to span you hand wider than a one or more frets. There are a lot of fingerings in the Major, Harmonic Minor, Melodic Minor – Scales that require fingerings wider than one fret, some two and three frets wide between two finger digits. If you analyze the guitar fret board the lower frets are wider than the higher frets. Due to the garden variety of the human hand big – small hand, long – short fingers, wide – skinny fingers. short – wide span between digits, limber – stiff, sensitive – callous, working hands, boxing hands ect. All of these factors come into play and we have to except them it’s the way god made us and there has to be work around’s. Not all fingerings can be achieved but they sometimes can through dedicated practice of dexterity exercise development and stretching. The nice thing is there’s always another way to do them on the guitar fret board.

For those guitar player who just don’t use their pinky while playing scales whatever you call it – (Omit Pinky Rule, Hi-3rd Rule, Mod3 Rule, Bending Finger Rule). There is a logic to the madness even through some schooled guitar players and teachers say they are bad habits that must be broken and make it purest rule to be set in stone. All rules can be broken with a meaningful logic and explanation to that rule.

When we look into the blues and rock styles of guitar (using the pentatonic and blues scales) there are some dynamics that come into play which is vibrato and bending guitar notes. Vibrato is a subtle vibration of the fretting hand that gives a note a fluttering vocal quality, watch BB King he is the master of the blues vibrato style. Bending of a string increases pitch bleeding a lower note to a higher note. The more tension the higher the pitch usually bending upward on the string and sometime down increasing the pitch up to (1/2 Step), (1 whole step), (1 1/2 steps) the string braking point. Both vibrato and bending can happen at the same time and a lot of players do both (Stevie Ray Vaughan, Robin Trower, BB King, Eric Clapton). If we try to do this with our pinky it’s almost physically impossible so we have to use (3rd Ring Finger) to accomplish the task. 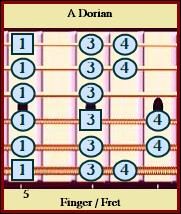 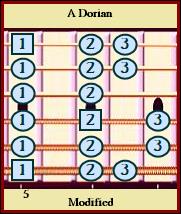